It doesn't feel like it's very often that I stumble on something that can say JUST what I am thinking or feeling.  I have been thinking all day about Mallorie, and her beauty, and how impossible it is to explain the phrase running through my mind, the one that's been running through my mind since they day I met her.  Image of God.  She came to us, perfectly meant to be her.  Exactly her.  And created in the image of God.

We felt "right" in some choices we made about surgeries or treatments that we believed would help her health, and not change her essence, but in our family, we all admitted to having strong reservations about some things ... like letting her have cleft palate and cleft lip surgeries.  If somehow we could have done just palate, I think we'd really have struggled there, because the lip didn't feel like the issue, anyway, the thing that put her at risk for sinus and ear infections, meningitis.  But after the first surgery, that beautiful, kissable lip 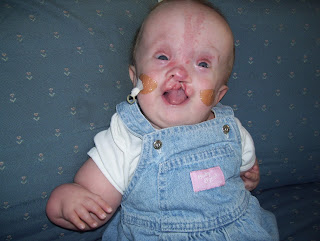 was changed, so stopping at that point wasn't really sensible.  So we continued.  Even though she smiled so broadly that she split the first lip adhesion apart within a few weeks! 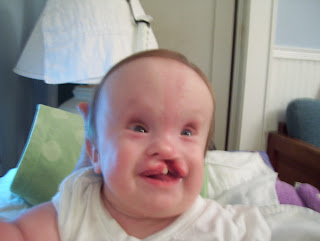 So she had to have it redone, entirely, 3 months later.  That's a whole other story. 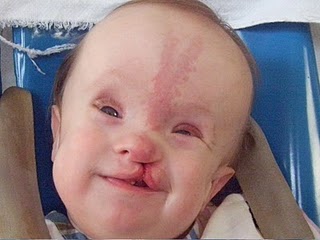 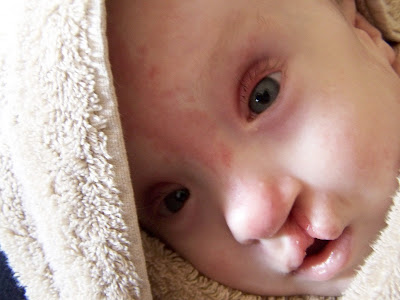 Created in the image of God, so she somehow, even with her differentnesses, was a reflection of the same God that the more "regular" people reflected, who expresses Himself through humans in a way that is unique from what He does with His other creations.  Being created in God's image means a person has value that doesn't depend on anything they can do or provide, but just because they contain God's image.  For some reason,  in order to show us who He was through humanity, God created a beautiful little girl with 9 fingers and the kind of arms that made an orthopedic surgeon feel really compelled to suggest straightening.  Maybe Mallorie's uniquenesses were necessary for her to show us something that no one else could show us about God.  Or maybe His image has nothing at all to do with how many fingers we have, or limbs, or ability to walk or ultimately even to smile or talk, since she lost those abilities in February.  I honestly don't at all know what it means for us to be created in God's image, since Mallorie was born and I realized that this concept referred to her.  But the phrase is running through my mind a lot these days, and today I found an artist who took my breath away.  His name is Tim Lowly.  And he created an ink drawing (of his daughter, Temma) which he called Imago Dei.
I wish I could do art of my children like this artist can, but at least today I was able to scour the internet for a chance to see more of his work.  He seems to understand what it means.  I know Illinois isn't as huge as Texas, so someday I hope Jessica will go see this man's work in person, for me.  :) 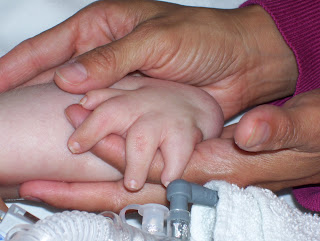 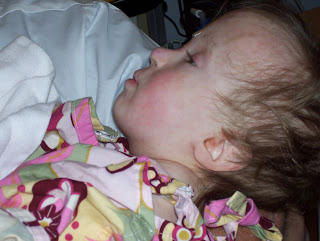 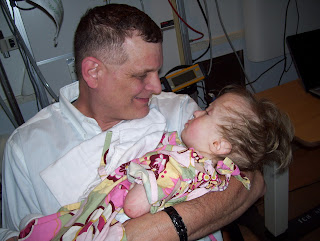 Mallorie was "fearfully and wonderfully made", in God's image.....and I personally believe that she was also made to be more like God, than most of us have been made. She probably taught many people more in her short life than most of us will ever teach and she was a pure soul...something most of us can never be. What a gift!

It breaks my heart that God's work for Mallorie, on this earth, ended so soon.....it's so difficult to say goodbye, for now, to someone who had such an impact on this world! I pray that God shows you His purpose and gives you the heart-warming knowledge that Mallorie is basking in her rewards for a job well done! May God give your family peace, strength, comfort and grace today and always! Love and Big Hugs!!!

when you look in her eyes, and you allow yourself to be drawn in by her smile... words aren't needed. Her face screams happiness, humor, thoughtfulness.
What a sincerely beautiful girl.

I agree! Look into those eyes, you see it all! She was beautiful, inside and out! I also agree with the comment from the VW's:"and I personally believe that she was also made to be more like God, than most of us have been made. She probably taught many people more in her short life than most of us will ever teach and she was a pure soul...something most of us can never be." Defiantly a pure soul. Very well said!

I love you Connie and I miss Mallorie every day. My prayers continue for you my sweet friend. My heart aches for you.

Love and Many Hugs, Laurie

Hone Family as in Ryan and Ashley said...

You have no idea who I am, but I am a T18 mom in Utah who lost her little boy in August. I know the heartache of losing a child. I'm sending all my love your way at this time and wish you happiness and peace.

thinking of you today and wanted you to know.....

She is beautiful. Your entire family is.

I am so sorry for your loss of your beautiful little girl.
I am an artist that came across this blog when I was researching for an art project called "Imago Dei". It started out because of a cute little girl I saw in an old children's book who had 6 fingers on one (or both?) hand. Anyway, this led me to thinking about what it means to be made in God's image. Anyway, I am learning so much more about God through learning about people who were born with uncommon physical traits.
Anyway, thank you for sharing, I am deeply moved by the love you have for your daughter, I hope that many people will know more of God's love for themselves and for others through her life. 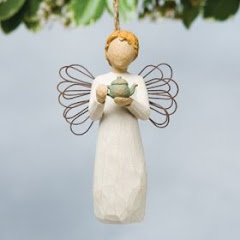 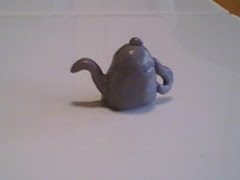